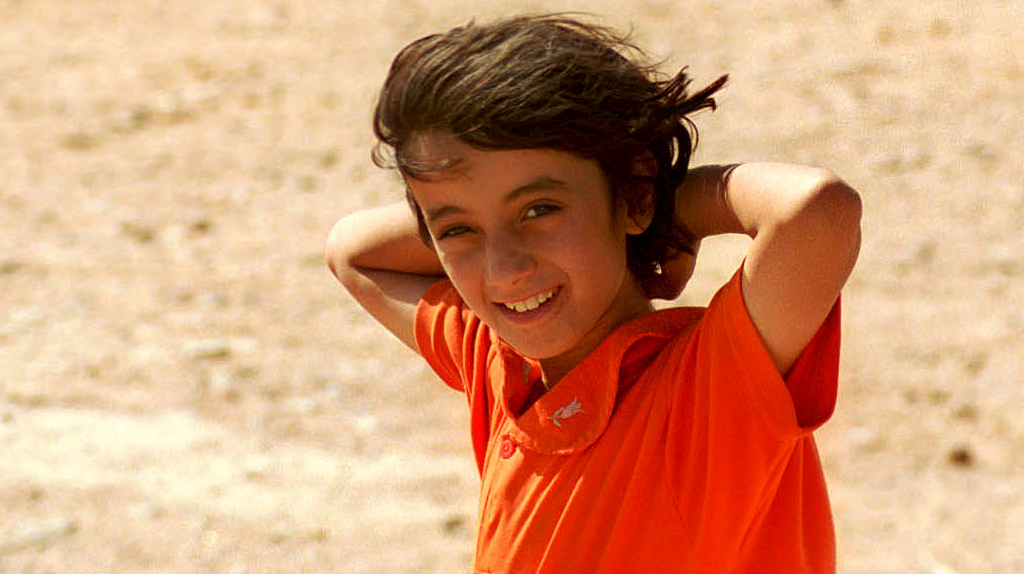 One thousand kilometers of desert separate Amman, the capital of Jordan, from Baghdad.

The wilted freeway splits the dry land and nettles the horizon skyline, pushing it away sunrising East. The right and the left sides of the road are twins. The driver, a gentle Iraqi fed up with the dull scenery, dozes off from time to time. His foot fell asleep long ago on the car’s pedal, at 100 an hour. We are watching his eye lids and we cough noisily when he starts waltzing the wheel on the straight road. He apologizes every time. Because he doesn’t understand our fear, he tells us that as long as we are still in Jordan, there is no danger waiting - Ali Baba is watching right across the border. Later on we were to see why drivers fear the most dangerous freeway in the world.

Al-Karamah, the border checkpoint between Jordan and Iraq is 380 kilometers away from Amman. Hundreds of cars are crowding chaotically to the two access gates. The horns’ noise refuses the dumb desert taking over the improvised parking lot. Most of the vehicles are not registered. If they succeed in crossing the border, they will get a license number in Iraq. Bunches of things are hung about to crumble - washing machines, refrigerators, TV sets, and prams, all of them old and sad. Thousands of people speak agitated in a very concerned Arabic, keeping in their eyes the humble request they showed to the border policeman. Most of them want to see their families. Migrating illegally, they have been wandering for years in search of a destiny, bearing the same prayer in their eyes. Trembling hands unpack documents, count them carefully and arrange them after their size. Passports are arranged in the same order as the one of the arrival arriving at the desk, where ten at once enter a squeaking door slammed every time. After having waited for four hours, and after having heard our names through the amplifiers, we leave exhausted. Al-Karamah was not designed for such ebb, actually flow of persons. After passing the two kilometers of no-man’s-land, we enter Iraq by Trebil. Being controlled by Americans, the border checkpoint is passed in four minutes. We still have five hours to drive to get to Baghdad. After passing Customs, you can see tens of traffickers selling gas to drivers alongside the road. Probably the cheapest gasoline in the world. An American dollar worth 1,500 Iraqi dinnars, a cup of coffee 1,000, while a liter of gasoline can be bought for 20 from the smugglers and for 50 from the gas stations still functioning after the war, where waiting rows are endless. Waking up from his somnolence, our driver fills the tank and gets on the road joining another four cars. The reason for keeping to these days the old custom of travelling in caravan is just the same - robbery. They generically call thieves Ali Babas. Highway robbery in Iraqi desert happen daily, tells us the driver who is no longer dozing off.

The city of One Thousand and One Nights greets us at noon with the worn out green of the desert wars. A graveyard of moving cars stirs the dust, which gets up to the mosques’ towers. Rusty, patched up, broken windowed, and blind lighted vehicles are stubborn enough to keep going and make their way with brakes’ push and starting again, inserting their skewly opened mouth in endless rows. Nobody loses temper because they all do the same. Only traffic lights blink, changing colors, amazed by the road’s show. Here and there, some guys agitate cell phones in the air, offering the only communication modality left after the war. The satellite connection is one dollar and twenty cents for one minute. Usually, the conversation gets too long because of the noise on the road to the satisfaction of the ad hoc operator. The fuel smugglers empty their cans for the same dirt - cheap prices. Near them, as it would be near any respectable "gas station", stalls with drinks tempt you with water, Coca-Cola, or counterfeited alcohol, this time for prohibition prices. Large crossroads are rounded by the stalls of the people exchanging money. 1,500 dinnars worth 10 American dollars. Further on, counting is replaced by weighting. From time to time, the little beggars around the stalls stop gamboling; the children watch in fascination the kilograms of notes, and then back to the new owner, begging him: "Mister - mister, money!"

A tea and sherbet haberdasher skips through the cars to cross the street. Dealers in clothes, cigarettes and food wave to him familiarly and wait for the hot liquor. The shoeblacks satisfy the block’s dandies, who roll through their fingers the beads. Noise gets lazy with the night prayers lament, and stalls gulp their goods in the dark. The city breathes until 23:00, when Americans call it lights out. Anyone caught in the streets is arrested until next morning or shot when not respecting summations.

You don’t see soldiers during the day but in the distance, guarding strategic objectives you can get near by only with special approvals, or racing military vehicles, indifferent to the noise around. And the people in Baghdad somehow feel protected. They have two big fears – Ali Baba and the return of Saddam. The 43 years old Bahget Nassiem El Saidei is married and has four children. The oldest is 12. When he talks about Saddam Hussein his eyes get glossy. Because he was attending the Friday sermon, Bahget was behind bars together with his wife and children for two months, then another four months by himself. They stayed in a nine square meter cell shared with another six prisoners in the Rasse prison in Baghdad, the place where Saddam’s secret service carried out its investigations. Every two days he was interrogated, beaten with clubs in the tibia and electrocuted. "I don’t think there is any family in Baghdad that was not directly affected by Saddam’s terror. Others spent years in the prison, much more than me, but it is hard to forget all the suffering and humiliation my wife and kids were put through…" The only bombed part of the Rasse prison was the one where administrative offices used to be. The still intact cells were afterwards devastated by the crowd’s rage. Among the ruins of the former headquarters of terror, the dry wind is blowing now pages of thousands of files, mixing together almost similar destinies.

Unofficial statistics estimate the crimes of the Saddam’s regime to about three million dead people, without counting common criminals and the victims of the wars against Iran and the USA. The members of the "Committee for Free Prisoners", founded right after Saddam had fled away, intend to help families find their missing relatives. The manager, Ibrahim al-Idrisy, tells us that they are working on almost 18 million files recovered from the prisons. Hassan Kither Mohammed is missing since 1982. Fatima, his sister, a vet with the Baghdad Zoo, hoped that Hassan succeeded in fleeing out the country. In June this year, the "Committee for Free Prisoners" handed her his file. Hassan Kither Mohammed was arrested in 1982 because he was attending the mosque’s service on Fridays and he was strangled to death on 1983, while being investigated. He was 22.

The Village for Sale

The Nuclear Energy Institute is 20 kilometers away from Baghdad. Across the street, there is a village inhabited by a few hundreds of souls, spread in small houses like adobe made hovels. Each one has a sign reading "For Sale".

Soliman Mosay Mahdi moved here, in El Wardiaa, six months ago. He is 35, married with 10 children. The youngest hasn’t turned one yet. He invited us inside and he offered us a glass of water. We refuse him politely considering all warning we got when leaving - not to eat and not to drink anything in El Wardiaa. Moreover, we were given advice not to tough anything either. Soliman smiles painfully and does not insist. He tells us with resignation that after the Institute got bombed, three months ago, and villagers stole recipients where radioactive material used to be kept. He took only a canister he had been using for water for a month. He is hoping that at least his children were not contaminated, even if measurement devices show the entire area as presenting a high degree of radioactivity. Being decided to sell and to move out, villagers wait in vain for suicide buyers, curiously looking at every stranger coming to their place.

Being pulled through wars for more than twenty years, Iraqis have learned to survive refusing the very thought of death. Millions of missing ones is still living in the hearts of millions of survivors. Families are putting on wall pictures of the loved ones, hoping in heavenly wonders. Common graves hide Middle Age horrors. The bodies discovered revive all the terror, which had them in its power for 35 years. As long as Saddam Hussein is still alive and free, the possibility of his return is frightening. For inhabitants of Baghdad, the American presence means the absence of Saddam. Locals accept the idea of the Americans being there for their oil, thinking they would do something for them in return. His eyes lost in the hot glitter of the teacup, Bahget Nassiem El Saidei is speaking his mind out loud:”If they want to be successful in Iraq and Syria, they have to give an example to all Arab worlds, to show that their arrival here means something good for the Iraqi people. They must help us build a democratic society and to start an economy able to get us out of poverty; they have to finish their work, otherwise Iraq succumbs in chaos.” Iraqis are desperately hoping in the American project.
They, discover absolutely new things, things to be fundamentally against the life they lead so far. Anytime they meet you can see them talking passionately, sparks in their eyes, for hours an end, until exhausting all arguments makes them understand they have something important to see inside themselves. Then silence lies over them, and their soul scatters smothery between the anachronic traditionalism they have been growing up with, and modernity, whose lack made them desperate.

After four days in Baghdad, the 12 hours of the returning to Amman were a silent journey. The Ali Baba’s thieves attacked the caravan only half an hour ahead of us. The four television teams travelling in six cars were stolen $ 7,500, all equipment and all recorded tapes. "… otherwise Iraq succumbs in chaos…" - recent echo from a world that, in ancient times, was called Mesopotamia, the cradle of civilitation. Nowadays, 7.000 years later, the people living here fight to catch up with modern civilization.

In No Man’s land, on the 2 kilometers area between Iraq and Jordan, almost 1,000 souls of Kurds, Iraqis and Palestinians dwell in a refugee’s camp. I see them once again from the car’s race when they wave us. You are forbidden to stop and to listen to them. On a sheet spread between two stakes, you can read in small letters: "We desperately ask all the leaders of the world to save us from 25 years of oppressed life!"