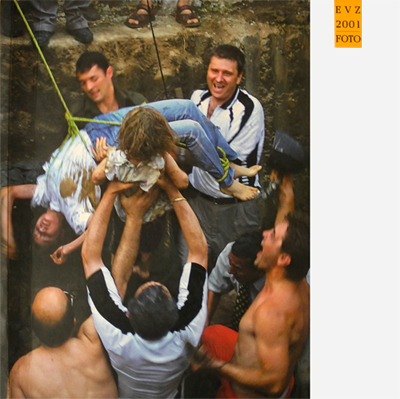 Early in 1997, “Evenimentul zilei” was printed by using linotype machines. The newspaper would come out carrying no other picture except for the busts of some top public figures as the printing machine couldn’t reproduce photographs. Zinc plates would come out drowned in ink and most characters in the pictures would look like some felons waned by police. At that time I made the mistake to ask our photojournalists to make a series of pictures of Bucharest in the run-up to Jacques Chirac’s visit. I got some. It was the first time that I shed some tears. The pictures were the indisputale proof of the newspaper’s poor quality photographic art. The next day, I renounced the services of the most of our photojournalists.That’s how the construction of the new team began. Shortly after Mihai Vasile had joined us, only the walls of the photo lab were still in place and some obsolete, worn out cameras. Most young artists would turn down our job offer. They wouldn’t join us because the newspaper hadn’t promoteed the concept of image and had not respect for it. We had no equipment. We had no money. There was no respect for the image. Everything exceeding the size of a stamp was regarded as a wasted printing space.

The reconstruction of image and of the photojournalist team with “Evenimentul zilei” look nearly four years. It started with Mihai Vasile. Other photographers joined us and than left. In time, Daniel Mihăilescu, Radu Vioreanu, Andrei Ciocârlan joined the team, followed by Petruţ Călinescu and Marius Nemeş. And what at first seemed impossible started to bear fruit. Now a big impact picture, then a photoreport bordering on pure art, than a topic that made the headlines. The first awards started to come. The picture of the month, awards in photo contests, exclusive shots from conflict areas, plunges into Romanian worlds no one had seen before, shocking political portraits, metaphoric photos and documentary photos.

The second edition of “Photomedia Showroom 2002” was clearly dominated by “Evenimentul zilei” team. Daniel Mihăilescu was declared “Photographer of the Year”, with another two awards going to Marius Nemeş and Petruţ Călinescu. It was the confirmation of a peerless team. Maybe their success also means the revival of newspaper photography, so long ignored or just spoiled by the story, size or artistic view.

I don’t know how many newspapers need to take their time in order to choose between two excellent photos. I don’t know many editorial staffs making efforts to keep in leash phtojournalists fascinated by war zones, conflicts or other dangerous places. I don’t know many newspapers where photojournalists are engaged in such a fierce competition like the team with “Evenimentul zilei”. And at the same time, enjoy such a generous group of friends. It’s the distinct sign of newspaper pictures’ revival and the signal announcing the birth of a new generation of camera artists.