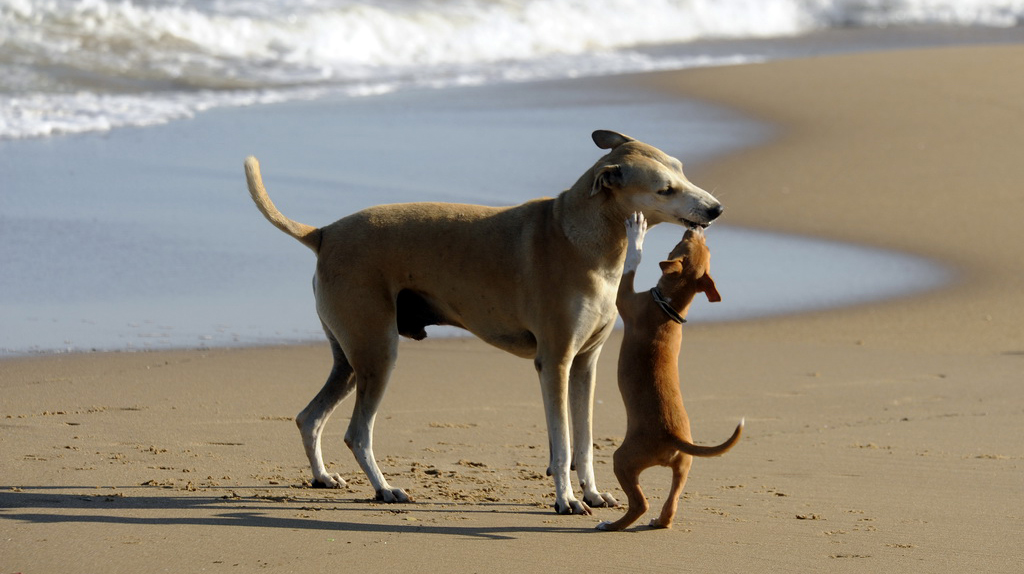 Slideshow concept by Mihai VASILE.
Music was composed for this slideshow by Dragos ALEXANDRU.
This slideshow was created for non-commercial purposes.

Around the world, more than 130.000 stray animals have been sterilised, treated and vaccinated in the “Four Paws” stray animal care project. Photos have been taken in 19 countries by Mihai VASILE and George NEDELCU (Sudan pictures) between 2002 - 2013.

Long time ago, just about when the Sun learned to walk on the Sky and the World was spoiling itself, spun by its rays, something inside the Earth’s belly started to quiver and a buzz caught life seeking its way towards the Light. Blue as the Sky, the Water sprang out and found rest into the World’s seas and oceans. Ever since, the springs come out of the deep and run back and forth to find their way to a sea of their own.

Regaining its senses, the Earth started to yield fruit, dressing up with grass and woods. Animals, one by one, shown up from God knows where, in a continuous frolic, have filled the air with different sounds, each one stranger than the other. And the silence from the beginning turned into a carnival like uproar, where all the Earth’s creatures were chatting, each one on its own tongue.

The Penguins, wiser, were watching with concern, hands at their back, and they were whispering in each other’s ears: “We have to stick together. Don’t lose your way. We will all go to the South Pole!”

- I want to go to the jungle!… To the jungle!… That will be my home. If you don’t mind, have you, by any chance, seen a way to the jungle? the Python asked the Camel in a hissing manner as she was chewing rakishly and joining the caravan that started its journey towards the sandy deserts. Lucky for him, he heard a loud call:

- All the Elephaaaants should gather around me. We will depart to the savannah and to the jungle. Each one of you may stop wherever you would like to liveeeee!

The Monkey, the Parrot, the Crocodile, the Giraffe, the Antelope, the Lion and many, many other creatures were joining the crowd passing by the Python at full speed, as he was crawling to the grass, trying to keep pace with them, encouraged by a rainbow of butterflies.

And, as the springs continued diligently to look for their seas, the animals, pack after pack, were heading towards that corner of the World that was to become their home. And the Sun, moved, blushed proudly, for the Earth had come Alive…

And, as the springs continued diligently to look for their seas, the animals, pack after pack, were heading towards that corner of the World that was to become their home. And the Sun, moved, blushed proudly, for the Earth had come Alive…

While the Penguins were swinging their way to the South Pole, the Tiger was sneaking around the Elephants feet, heading to the jungle, as well. And when the Bear, scratching his head, asked the Hedgehog: “Hey, old man, do you have any idea, is there any honey to be found at the icy pole?, a Weevil that sat on the top of his muzzle laughed its head off thinking that such a huge creature may fancy to stay at the pity of such a small insect as a Bee. Looking back in anger, the Bear, crossed-eyed at his nose tickling, started to raise his voice in a very self-convincing manner:

- You will see, if I’ll make there, I won’t need any bees… I will work for myself until my hair will grow white! and left, battered, to scratch his back against the first tree that came across. What an idea, he whispered to himself…white hair… Fur! and smiled in content: “The Brown Bear, the Polar Bear!… They both sound just as good!”

Only the Dog sat aside, confused, not knowing where to go. “I could live in any place, as long as I’m not alone, he thought. Thus, it doesn’t really matter where I go, because it’s not a place I should look for, but a friend.” And left into the World, sniffing the tracks of the already departed animals.

Wandering around, looking for a creature to love, he reached many corners of the World: high mountain peaks, where he met the Chamois, tropical forests, where the noisy Chimpanzees accompanied him part of the way just to make sure he didn’t lose his way through the liana thicket, icy pole where he caught sight of the Bear, who, by the way, had turned white, as he had formerly thought he would. Then he wandered through the green savannah where the Zebras grazed. Most generously, they invited him to settle there and share the lavish fruit of their land. He promised he’ll be back and left further wandering through the Badgers thickets, Scorpions deserts, meadows of the Dears and the hot sunny beaches of the Tortoises.

And everywhere, but everywhere he had been, the Dog looked for the same thing - a true friend. Until one night, nobody remembers when and where exactly, while he was passing by a group of trees, he had heard a low call as he had never heard before: “Hey, doggy!”. He raised his head in surprise, pricking up his ears in that direction. He widely opened his eyes and he saw through blinking eyelashes a two-legged creature, furless, that crouched in front of him, reaching out its hand. He looked at it closely, turning his head once to the left…” no, that was not well…” once more, to the right… A large smile brightened up the face of the stranger and the Dog realized he was wagging his tail while he was sniffing the scent that came from the creature. “Hey, doggy!” repeated the creature leaning further towards him. The Dog came near and sniffed his hand: “Hmm, he said to himself, is this the scent of a friend ?” And then, a wonderful thing happened. That hand started to move first on his head, then behind his ears, on the muzzle and, for the first time, he felt something he had never felt before - caress.

Thus, the Dog found the ending and the meaning of his journey. And ever since, as the springs come out of the deep and run back and forth to find their way to a sea of their own, every Dog, from every corner of the World, as soon as it is born, starts looking for a Man of his own.